When you’re shopping for power equipment, you’ll often see companies tout their OHC or OHV engines.  “What’s the difference?” you may have wondered?  What about these “flathead” engines that you also hear about? Here’s the skinny:

Flathead engines, also known as L-head engines or L-block engines, are the most simplistic type of small engine that you’ll find in power equipment.  They are often smaller than OHC or OHV engines and less sensitive to low-octane fuel.  While they get the job done, they are generally considered to be of a lesser quality than OHC or OHV designs.

Overhead valve engines (also called pushrod or I-head engines) are a newer design than the older flathead models, and they’re certainly an improvement.  While flathead engines have their valves next to the central cylinder(s), the overhead valve engines put them above the cylinder.  This makes them slightly bigger, but they produce more power.  Their compression ratios (the higher the compression ratio, the more energy the engine can extract from your fuel) are usually around 8.5:1 as opposed to 7:1 with the flatheads.  Bottom line, more power than a flathead, but a little bit bigger.  You’ll find OHV engines on the DR Field and Brush Mowers and DR Wood Chippers.

Overhead camshaft engines are generally considered the best of these three engine types.  They place the valves as well as the camshaft above the cylinder(s).  This means that all OHC engines are technically OHV engines, but not all OHV engines are OHC engines.  With fewer moving parts, there are fewer issues that can arise with OHC models.  Also, they run cooler and more efficiently than the OHVs.  Because they have an even higher compression ratio and are capable of even more RPMs (revolutions per minute), they also produce more power.  Of all the types of small engines that you’ll find in power equipment, the OHCs are the highest quality.  You’ll find them on the DR Trimmer Mowers, DR Stump Grinders, and select other machines in the DR line-up. 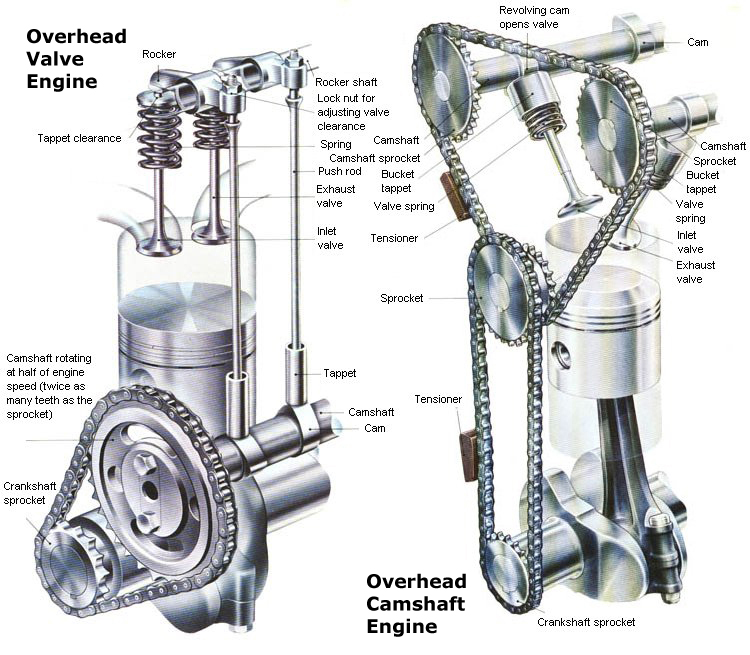