The good news about the recent ice storm is that things always look worse than they really are after such an event. A tortured landscape full of ice-covered trees bent into contorted forms conjures images of long-lasting devastation. But when the ice melts and spring finally returns – which it surely will, things will take on a softer appearance.

The bad news is that some trees will never regain their former, upright stature. Such trees, though they could survive for many years, will need to be removed. 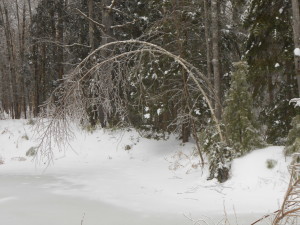 Tall, thin trees, or what we might term trees in the “pole” stage, are susceptible to extreme bending when encrusted with ice. Typical of these are young specimens of white and gray birch, the various poplars and red maples.

Even these might survive relatively unscathed if only bent for a short time, say one day or less. But after that, the inner parts of the tree change shape and the trees develop a permanent “set.” In the case of our recent storm, most of these thin trees have already gone way past the point of recovery and will need to be removed. But come spring, when cleanup can begin, what can we do with the litter from these wasted trees? Well, there are more uses than meet the eye.

First, the thin tips and small branches can be run through a DR Chipper Shredder and turned into a useful product. Wood chips make a wonderful mulch. Other uses of fresh wood chips include making compost. And some companies that sell wild mushroom spawn recommend making a bed of fresh, wet wood chips and then sprinkling the mushroom spawn over it.

For longer, straight sections of these young trees, say butt sections up to three inches in diameter, the number of uses are only limited by your imagination. Homemade trellises come immediately to mind. A drill, handsaw and some sheetrock screws are all you need to make a handsome, rustic trellis.

For those who might like a colonial theme for their gardens, a wattle fence makes a great backdrop. These consist of uprights set directly in the ground and thinner sections woven in between. Some people make more elaborate wattle fences by inserting the uprights, or standers, in a moveable base made of a four-foot log, split in half and drilled to accept the uprights.

Finally, if you only have a small amount of these small, bent trees, many municipalities accept neatly stacked brush during their spring cleanup days. And for those with lots of land, it harms nothing to haul these otherwise useless trees and branches into the woods to become brushpiles. Modern woodcutters no longer pile their brush, but when they did, brushpiles provided shelter for legions of wild critters, including snowshoe hares. You can help nature by creating new brushpiles.

Sometimes, the sheer weight of ice can cause a tree to lean to such an extent that its roots literally pop out of the ground. This requires a major cleanup effort.

Other times, while the tree itself remains upright, its top will snap. Here’s an interesting observation of how a mature red maple by my house evolved after the ice storm of 1998.

The tree’s top not only broke, but splintered as well. That spring, the tree produced numerous epicormic branches, or “watersprouts.” These grew so swiftly that they soon gave the tree a perfectly symmetrical shape. Also, the splintered top was completely hidden by the covering of green leaves. The overall effect was a tree that looked much like the typical picture of a tree that a child might draw with a crayon. All this served to change my mind and instead of cutting the tree, I let it stand.

Last year, the tree had grown to such a height that it interfered with my view of the nighttime sky to the northeast. Being an amateur astronomer, I decided that it was better to cut the tree rather than lose my view of certain of my favorite constellations and their collection of star clusters, double stars and galaxies.

Also, in the back of my mind, I knew that although it looked pristine, the maple tree was compromised. When a major portion of a tree, especially the top, breaks off, it leaves open a window for disease and rot. Eventually, it would have suffered, although that would no doubt have been many years in the future.

Weeping willows are dear to my heart. I associate them with the verdure of spring, among other things. To that end, I planted a weeping willow near my trout pond about 15 years ago, just after the big ice storm. Willows grow quickly and mine soon reached to 10 or 12 feet. Then in winter, voles found the tree and gnawed around the base, killing the tree. But one side shoot survived and that grew to the tree I have today.

The year the willow-by-the-pond was planted, I also planted several others in nearby wet locations. These I got from shoots, or cuttings, that I took from a neighbor’s willow that was broken in two by the 1998 ice storm. Both these prospered. But the recent ice storm bent one of them to the ground and part of it extended partway across my driveway. So I cut the top. What the tree will look like come spring is anyone’s guess. Willows are tough, but since this one was laid flat, it likely won’t make it.

The other tree that I grew from sticking cut shoots in the ground stands in a back field, but it’s impossible to go there to check because of the threat of falling branches. So its fate remains unknown.

But my favorite, the one by the pond, is totally ruined. It was stricken near-flat and will never come back to an upright position. I have several choices here. First, I can just cut it and plant another tree. Or I could cut the top and leave the base in hopes that new shoots will again grow another tree. It took 15 years to grow this tree and we only have so many 15-year periods in our lifetimes, so this will be a difficult choice.

At the very least, I now have a near-endless source of willow cuttings to take to various points on my property and stick in wet ground in hopes that some day that little switch will grow into a great tree. And perhaps I’ll try my hand at weaving a much-needed packbasket. In fact, in Ireland, people used to grow willows for basket making in what was called a “Sally” (short for Salix) garden.

So here we are in January. We have several more months, at a minimum, before we can begin serious ice-storm cleanup. But at least that gives us time to plan. Above all, know that these things take time. Don’t try and do more than is physically possible. And remember, everyone else faces the same problems.

Want to learn more about DR Chippers and Chipper/Shredders? 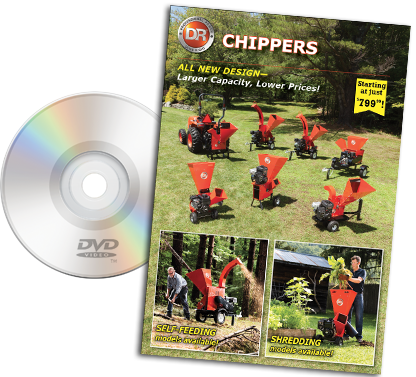