Some people subscribe to that. But we’re mighty pleased that our DR product engineers don’t. Because despite the rave reviews our owners have given the DR Field and Brush Mower over the years, and despite the fact that its sales continue to lead the industry, our designers just couldn’t stop themselves.

Yup, they’ve gone and made a good thing better. 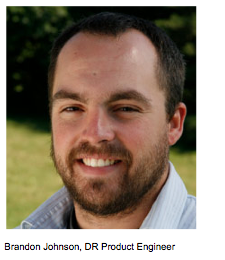 “Everything can be improved, and that’s what we set out to do,” says DR Product Engineer, Brandon Johnson.

“We started with the voice of the customer. We read every available customer survey, review, and service track. Then we distilled the information down to the most common issues.  What floated to the top was what we coined ‘operator experience’. It was clear that the biggest opportunity for improving customer satisfaction was to focus on maneuverability and operator ergonomics. While customers love the performance of the older models, they want them to be less fatiguing to operate.”

That starting point led to numerous small improvements, and gradually to one very big one.

“We improved the balance of the mower, designed new controls and made the handlebar height adjustable. We took out unnecessary weight, but added reinforcement in key wear spots. The result is a machine that is significantly lighter but every bit as rugged as its predecessor,” says Johnson.

And the BIG improvement?

By adding independent disc brakes on each wheel the design team introduced a powered steering mechanism that makes turning the mower astonishingly easy.

“The beauty of the disc brakes is that they work equally well for steering adjustments big and small. You can easily swing a wide turn to reverse directions at the end of a row, and you can control the speed of the turn by how hard you squeeze the brake. They’re also great for making much smaller corrections that improve traction and tracking. For example, if you’re mowing across a slope, you can feather the uphill brake to check the tendency of the mower to drift downhill. There are plenty of other situations too where that type of fingertip control makes mowing easier and more satisfying.”

As good design solutions often do, the brakes solved for more than the issue that initially prompted it. That’s because the team had simultaneously been trying to figure out how we could offer models with wider cuts. Since a wide cut means more deck weight, it seemed likely that making the deck wider would make the operator’s job harder when it came to turning.

But the powered steering provided by the disc brakes solved for that and more. As a result we now offer two additional cutting deck widths. In addition to the traditional 26” deck most DR Brush Mower owners are familiar with, we now offer 30” and 34” options with power steering.

The new 34” deck—which is a full 30% wider than the standard 26” deck—can be maneuvered easily by anyone…without manhandling the machine. And the extra width means the work gets done faster.

“We’re really proud of this one,” says Johnson, who led the two-year redesign project, “and I think customers are going to love it. But, as usual, we’ll let them have the last word.” 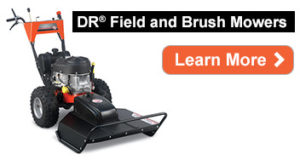 Want to learn more about DR Field and Brush Mowers? 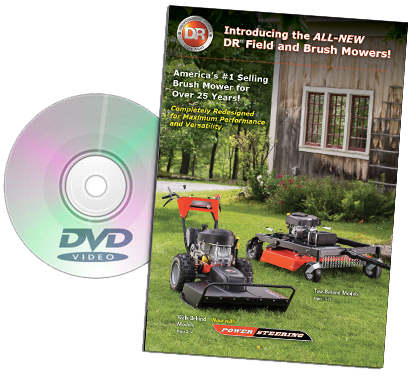